The Suffolk Waste Partnership has launched a campaign in two Suffolk towns to tackle the cost of people placing the wrong items in their recycling bins.

‘Getting your Recycling Right’ will be working with around 1,800 homes in the Chantry area of Ipswich and a further 1800 homes in central Lowestoft to help residents understand what can and can’t go in their recycling bin, while also aiming to reduce the £500,000 annual taxpayer cost of removing the wrong items from recycling bins. The two areas identified are being targeted as historically they have had higher than average levels of recycling bin contamination.

In Suffolk, more than half of our household waste is recycled, but contamination levels have been rising as people increasingly put unsuitable items such as food, glass, electrical items and used nappies in their kerbside recycling bins. These items are potentially dangerous, can have a negative impact on the environment and ultimately cost the taxpayer extra money to clean up.

Homes in the campaign area can expect to receive a new information pack through their door as well as a helpful information sticker on their bins. In addition, contractors from Groundworks, working on behalf of the partnership, will be visiting homes to raise awareness and ask people to get their recycling right.

All recyclable waste collected from Suffolk households is taken to the Materials Recycling Facility (MRF) in Great Blakenham, where it is sorted and baled before being sent on for recycling. This facility is designed to only accept and process certain materials. If the wrong items are delivered they have to be removed, sometimes by hand.

To ensure the correct items are put into their recycling bins, residents are being asked to remember the following points to combat contamination:

“While it is great we are recycling more than half of our household waste here in Suffolk, this campaign will hopefully help people better understand what can be put in their recycling bins and what can’t.

“Contaminating your recycling bin isn’t a small problem and this year it’s costing Suffolk taxpayers over £500,000 just to remove the wrong stuff. This money could be better spent supporting services elsewhere. It’s therefore vital that we all do our bit and help get our recycling right.”

For more information about what can be recycled in your blue bin, please visit www.suffolkrecycle.today. 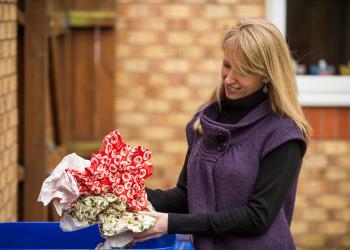