Looking forward to a new year – and the challenge of creating a new super district council for east Suffolk.

The east Suffolk councils, Suffolk Coastal and Waveney District Councils, made history when they became the first 2 district councils in the country to successfully get the backing of the Secretary of State to create a  single new council.

On 7 November, the Secretary of State for Communities and Local Government, The Rt Hon Sajid Javid, announced he was ‘minded to’ support the application for creating a new council in east Suffolk.

And he also invited representations on the proposal, with a closing date of 8 January 2018. After that, he is expected to make his final decision on the future of our councils.

But, as you would expect, work has already started so the councils are in pole position to meet the challenging timetable of work once we get the Secretary of State’s decision.

A Member Programme Board has been created to oversee the progression of the creation of the new council and  a number of topic specific Member Working Groups have been set up to assist it in its task.

The Member Programme Board  (pictured) is made up of leaders of both councils and councillors from Suffolk Coastal and Waveney District Councils. It will lead on making recommendations concerning the new council, such as the number of councillors, branding and signage, financial and governance arrangements.

The group will now meeting regularly to ensure the necessary arrangements are in place for the creation of the new council in 2019.

But the next crucial stage in this process is the Secretary of State for Communities and Local Government, Rt Hon Sajid Javid, to announce his final decision on the proposal.

The story so far…

East Suffolk has been leading the way for a number of years.   The two councils of Suffolk Coastal and Waveney were amongst the first in the country to share a chief executive (since 2009), and subsequently a shared management team and workforce.  We also have a shared website under the “East Suffolk” banner, a joint business plan and a large number of joint policies.

Additionally, the two councils have a lot in common, they are both coastal, they both have a big town at each end, each has a port, they have rural and urban communities, tourism and energy are key to both areas and the A12 and train line runs through each district, as does the AONB (Area of Outstanding Natural Beauty).

With all that sharing going on and having all those things in common, the next natural step was to look into becoming one council.

Our residents and stakeholders were consulted, a business case was prepared and councillors decided that it made absolute sense to proceed with becoming one council.

The business case was sent to the Secretary of State for communities and Local Government, Sajid Javid, for approval and we were recently the first two districts to receive a “minded to” proceed decision from him.

The advantages of becoming one council were clear – we’d have a bigger voice at regional and national level, we’d be better able to get good deals when contracting services like waste collection, there would be less bureaucracy in that we wouldn’t to do lots of things twice like attending committee meetings, producing reports, policies etc, and, ultimately, we’d have more time and resource to focus on providing a better service to our residents.

In an era of cuts and pressure on local government, it is important for councils to be as resilient as possible to face those challenges head on.  Being one council will significantly help us with that challenge and will mean we can go on providing good services to our residents well into the future.

Now that we have the “minded to” decision, the Secretary of State has invited representations, which will close on 8th January 2018 after which time we hope to receive a ‘final’ decision from him.

Once a final decision is received, the formal process of parliament creating the necessary laws needed to bring about a new council will start.

This then means an electoral review process can take place, where the councils will recommend new electoral wards for the new East Suffolk Council - which councillors will be elected to in May 2019, when the new council will hold its first election. 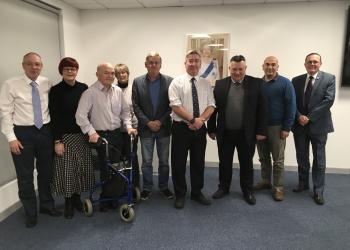