The first stages of a major refurbishment at a Carlton Colville play park have been completed, with the installation of a new multi-use games area and play equipment.

In partnership with Waveney Norse, Sentinel Leisure Trust and working closely with Carlton Colville Town Council, Waveney District Council has invested £100,000 of Section 106 contributions from nearby housing developments to fund a three-stage refurbishment of Carlton Meadow Park, off Lowestoft Road.

Following an evaluation of Council-owned play spaces carried out by Sentinel last year, Carlton Meadow Park was identified as one of several play areas in need of development. Waveney Norse has now completed the first two stages of refurbishment, which include the installation of a new multi-use games arena and junior play equipment. The final stage will include landscaping and the creation of a concrete ‘formed’ skate park.

“Play and exercise is essential for the physical and mental wellbeing of our children and young people; the Council is committed to investing in projects which increase physical activity and improve participation in sport across all ages.

The improvements at Carlton Meadow Park, along with planned refurbishments at several other play areas in the district, provide local residents with a modern and vibrant community space for all ages to enjoy.”

“Carlton Colville Town Council  is delighted with the new play equipment and multi use games area which has been provided by Waveney District Council and installed in partnership with Waveney Norse and Sentinel at Carlton Meadow Park.

It is hoped that the whole community will get extensive use out of this and it will encourage children of all ages to get outside and active.”

44 play areas in Waveney are owned by the District Council and are managed and maintained by the Council’s commercial partners Waveney Norse, with play development led by Sentinel Leisure Trust.

Sentinel Leisure Trust provides a biennial play space review and action plan which supports the Council, local town and parish councils and Waveney Norse to allocate funds to areas most in need. Sentinel and Waveney Norse also work with housing associations and local community groups to assist with the delivery of play facilities in their areas.

In addition to Carlton Meadow Park, several other play areas in Waveney are schedule for improvements, also using Section 106 contributions. New toddler and junior play equipment will be installed at Rosedale Park in south Lowestoft and working with Lowestoft Town Council, a new toddler play area will be delivered at Granville Road in Lowestoft, providing much-needed play space close to the town centre. Improvements will also be made to the play space at Stoven Close in Lowestoft whilst in Halesworth, toddler play equipment will be installed at Gainsborough Drive, following a successful application to the Tesco Bags for Life scheme which received strong support from local residents.

Designs are currently being developed for the skate park at Carlton Meadow Park and additional external funding is being sought. 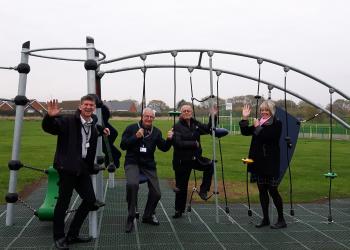