The first ever Honour Run proved to be a great success when it took place on Sunday (21 October 2018).

Around 250 walkers, joggers and runners of all ages took part in the run and raised a total of £2,600 for the Suffolk British Legion Poppy Appeal, which supports serving and ex-serving men and women in the armed forces.

“This is the first time we’ve put on this kind of event and it was a huge success. Thank you to everyone who took part in the run and all the volunteers who helped us run the event”, said Cllr TJ Haworth-Culf, Suffolk Coastal’s Cabinet Member with responsibility for customers, communities and leisure.

“We raised £2,600 for the Suffolk British Legion Poppy Appeal which is fantastic. We even got some exercise and fresh air while doing so - what better way to spend a Sunday morning?”

The event was organised by Suffolk Coastal District Council and Suffolk British Legion with thanks going to the Forestry Commission and Rock Barracks who supported the event by letting us to use of the facilities.

Local companies also got involved by contributing to  goodie bags for everyone who crossed the finishing line. These include East of England Coop, Farm Field Crisps, Munchy Seeds and Places Leisure.

The run took place in Rendlesham Forest, which was established during the First World War when Britain had an increasing demand for timber.

The Royal British Legion is leading the nation in the Thank You movement – to say thank you to the WW1 generation who served, sacrificed and changed the world we live in today. #Thankyou100

Photos from the Honour Run are now available here. 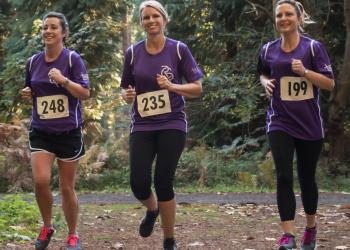