A local football club’s U9 teams have a winning new look - thanks to a donation from their local district councillor.

Simon Barber, Manager at Martlesham FC, said: “We’re really grateful to Cllr Blundell for this funding, which has been a real boost for the club and our young players.

“It has enabled us to invest in new equipment, meaning we are now in line with other clubs in the area. It has also allowed us to provide each player with their own kit, including their own training top and football.

“We are now able to attract and take on new players and are even being approached by local players and their parents. This year we were able to take on four new players and we have another two starting in the new year, meaning our two under 9 teams will consist of 20 local young players from local schools.”

The donation helped pay for new equipment and football kit for the U9 teams, including footballs, goalposts and nettings, corner flags, barrier tape and stakes and training tops for all players and management.

Cllr Blundell said: “I am really pleased that I was able to donate this money to the club and support our young players. It is a fantastic club that gives local young people the opportunity to be part of a team and make new friends, learn new skills and improve health and fitness.” 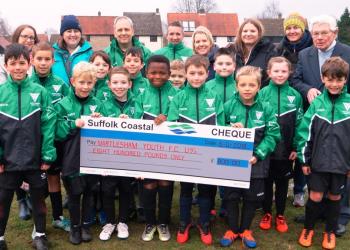