A memorial fund set up to support local organisations has given donations to two Lowestoft-based charities to support their community work.

Barbara Hood, on behalf of the Edward and Ivy Rose Hood Memorial Fund and Cllr Frank Mortimer, Chairman of Waveney District Council, assisted by Cllr Trish Mortimer, recently presented cheques to the Salvation Army in Lowestoft and to D.I.A.L Lowestoft and Waveney.

In December, the Memorial Fund donated £10,000 to D.I.A.L Lowestoft and Waveney at the organisations Christmas lunch, taking place at the Ivy House Country Hotel in Oulton Broad. In a separate presentation, £1,000 was given to the Salvation Army help fund their Christmas meals.

“I am honoured to be given the opportunity to assist Barbara Hood and my consort Cllr Trish Mortimer in handing over cheques to D.I.A.L Lowestoft and Waveney and the Salvation Army. D.I.A.L has gone through a difficult time of late however the trustees are working tirelessly to ensure the people of Waveney and Lowestoft continue to receive help and assistance where needed.

“The Salvation Army do such a worthwhile job supporting vulnerable people, those living alone and those who sometimes don't know where their next meal is coming from. This is particularly important during the festive season when many can find life difficult.”

“It gives me enormous pleasure to present a cheque for £1,000 to the Salvation Army to help fund the wonderful work providing food for people with a special need and to help fund meals on Christmas Day. I am also delighted to present D.I.A.L with a grant from the fund to enable them to continue their wonderful work to improve the lives of disabled people. Both my relatives would have felt really rewarded to be able to be associated with D.I.A.L.”

"It was lovely that Barbara Hood could attend the Christmas lunch for D.I.A.L. in order to present us with a cheque for £10,000 from her relatives’ Trust Fund. On behalf of all at D.I.A.L., I can assure her and the trustees of the Edward and Ivy Rose Hood Memorial Fund, that the money will be spent in enabling our service to continue and to help some of the most vulnerable people in Lowestoft and Waveney."

As well as local charities, the Edward and Ivy Rose Hood Memorial Fund also supports study at the UEA and environmental conservation in Suffolk and Norfolk. Edward and Ivy Hood founded the Lowestoft branch of the Suffolk Wildlife Trust and last year, £33,000 was donated from the fund  towards the Trust’s £1million campaign to expand its Carlton Marshes reserve. 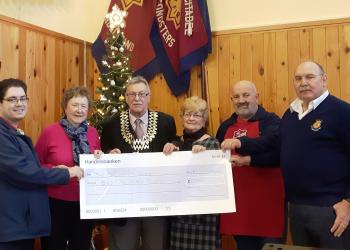