Night-time clean up before Christmas

While most of us were safely tucked up in our beds, a team of workers have been out cleaning up a busy stretch of the A12 in time for Christmas.

A two-man team from Suffolk Coastal’s operation partners, Suffolk Coastal Norse, worked overnight (8pm - 5am) for 11 nights in early December to clear up the rubbish on the A12, from the Seven Hills roundabout to Woodbridge.

The team cleared away 2.700 tonnes of litter in total. Some unusual items were collected, such as an iPad and shoes, as well as fast food wrappers, empty bottles, plastic sheets and vehicle parts to mention a few.

“The A12 is a busy road, which unfortunately brings with it the problem of people thoughtlessly throwing rubbish from their vehicles”, said Cllr Carol Poulter, Suffolk Coastal’s Cabinet Member with responsibility for the Green Environment.

“As well as being an eye-sore and reflecting badly on this district to people driving along the A12, the litter can also create a hazard to motorists, if it is blown on to the road or catches fire.

“So a team from our partners at Suffolk Coastal Norse worked through the night to clear away the litter. Hopefully, motorists will respect their hard work and not throw litter out of their vehicles. Keep it in the vehicle and dispose of it properly when you stop, instead of making a mess which can put others at risk.” 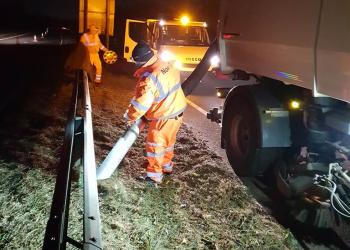