Residents and visitors to Lowestoft are being encouraged to dispose of their cigarette butts correctly to help reduce littering in the town centre.

On Saturday 17 August, the East Suffolk Communities Team and East Suffolk Norse will be in Lowestoft town centre along with Groundwork Suffolk and the East Suffolk Plastic Action Champions, to speak with people about cigarette butt littering. The event will be supported by Lowestoft Town Council.

Cigarette butts are the most common form of littering. In a survey carried out in Lowestoft in 2018, 53% of all litter was smoking-related waste and across the country, one in 10 people do not consider putting a cigarette down the drain to be littering.

As well as harmful plastic, cigarette butts contain toxic chemical ingredients including arsenic, lead and nicotine which can all be released when the butts break up in the environment.

Anyone seen littering, including dropping a cigarette butt, can be fined £80 via a Fixed Penalty Notice. Failure to pay this can result in prosecution, a criminal record and a further fine of up to £2,500.

“Cigarette butts are only small but can be harmful when dropped in the street or down the drain. Not only can they leach toxins into the environment causing harm to wildlife, they are also unsightly.

There is no excuse for dropping any kind of litter, including cigarette butts, and we would urge people to dispose of their waste in the nearest litter bin. All of us can make small changes in protecting the environment and these small changes over time will make a difference.”

Cigarette butts can also be harmful to marine wildlife when disposed of in the streets. Surface water drains, including road gullies, are only designed to carry rainwater and unlike foul water systems which feed into sewage treatment works, surface water drains usually lead directly to natural watercourses. Any waste, such as cigarette butts, which enter these drains can therefore end up polluting the watercourses, harming fish and other wildlife.

Groundwork Suffolk, the East Suffolk Greenprint Forum and East Suffolk Council are supporting the ‘Yellow Fish’ anti-pollution project which raises awareness of the importance of preventing litter from entering the surface water drainage.

To help spread the project’s message of ‘Only Rain Down the Drain’, Groundwork ‘Green Champions’ will be calling on homes in Lowestoft on Wednesday 14 August: www.eastsuffolk.gov.uk/news/residents-reminded-only-rain-down-the-drain 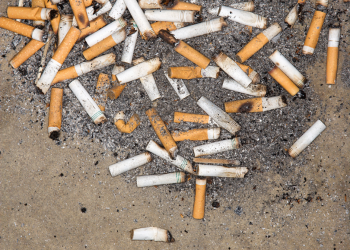