First Light Festival will ‘shine a light’ on Lowestoft

The Leader of East Suffolk Council believes next weekend's First Light Festival in Lowestoft is a 'landmark occasion providing an incredible boost' for the people and businesses of the town.

With five days to go until the free, non-stop 24 hour long, multi-arts festival gets under way, Councillor Steve Gallant says that it is an event to put Lowestoft on the map as part of a wider strategy to improve the seafront area and increase visitor numbers.

The festival - which celebrates the first light of midsummer’s weekend in Britain’s most easterly town - is a concept which evolved from the ongoing Lowestoft South Beach Vision project; a collaboration between internationally renowned designers Hemingway Design (led by Wayne Hemingway MBE), East Suffolk Council and other local partners and businesses. Arts charity FlipSide are delivering the festival in partnership with Hemingway Design.

The bulk of the funding for the event has come from a £100,000 award from Arts Council England and £80,000 from East Suffolk with further contributions from the Council in subsequent years.

“East Suffolk Council is committed to a bright future for Lowestoft and investment in this fantastic event is a real statement of intent. It has attracted national attention for the town and for the county and we are delighted that so many creative people and organisations are coming together to make this happen.

Festivals bring new visitors to towns – visitors who contribute to the local economy and if they enjoy themselves, come back again and again. Lowestoft has so much to offer and, as a council, we are determined to help it fulfil its potential. This is a landmark occasion providing an incredible boost for local people and businesses."

The festival grew out of the wider seafront strategy that Waveney District Council (prior to becoming East Suffolk Council) commissioned Hemingway Design to carry out.

The First Light Festival will literally 'shine a light' on this unique location, with local stakeholders co-curating content in a programme that has sunrise as its central focus and which celebrates a sense of place – including Lowestoft’s maritime heritage, community of artists and musicians and science connections, notably to large scale renewable energy production and scientific research by resident government agency CEFAS, the UK’s foremost marine research organisation. 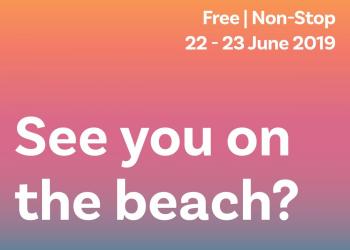