Lowestoft’s town centre will receive a further boost thanks to funding of over £500,000, which will support regeneration and improvements in and around London Road.

“This is fantastic news for Lowestoft and further underlines the town's great potential. As part of a multi-faceted approach to regeneration, we see Lowestoft's cultural and heritage assets as a way of encouraging and unlocking crucial investment. Projects such as Making Waves Together, the First Light Festival and the existing North Lowestoft HAZ are creating a sense of pride and aspiration for the area and this funding from Historic England provides an excellent opportunity to extend this work.

We are acutely aware of the issues facing high streets and Lowestoft is no different. In a crowded market place, where funding is needed for towns on a nationwide level, this is reward for a huge amount of work and following the earlier announcement of funding from the Government’s New Towns Fund, this is another step towards a genuinely promising future for Lowestoft.”

The HSHAZ programme will use some of the existing structures already in place through the North Lowestoft Heritage Action Zone (HAZ). These include a Heritage Action Zone Partnership Board, with representatives from key partners including Lowestoft Town Council, Lowestoft Vision and East Suffolk Building Preservation Trust. As with the HAZ, the London Road HSHAZ will offer opportunities for closer working between local organisations, joint initiatives and the sharing of resources and knowledge.

A programme of projects will now be fully developed with Historic England and will include:

This funding follows the news last week that Lowestoft had been chosen to benefit from funding as part of the Government’s £3.6 billion 'New Towns Fund'. Lowestoft is one of 100 towns which will now have the opportunity to bid for up to £25 million to develop innovative regeneration proposals. The fund is targeting those towns with proud industrial and economic heritage but who have not necessarily always benefitted from economic growth in the same way as more prosperous areas.

The North Lowestoft HAZ is a five year programme focusing on some of the oldest parts of the town including the High Street and Scores. Together with residents and businesses, the project aims to improve the HAZ area by restoring historic buildings and kick-starting regeneration by celebrating the unique character and heritage of this part of the town. 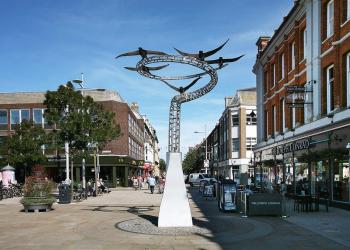