A man has been found guilty of two incidents of illegal fly-tipping in East Suffolk, having been paid to remove waste by unsuspecting residents.

Andrew Jones appeared at Great Yarmouth Magistrates’ Court on Tuesday 9 April having been charged by East Suffolk Council and pleaded guilty to both offences, as well as a third offence of failing to supply information.

On 4 April 2018, a large quantity of household waste comprising furniture, cardboard boxes, clothing and personal effects was reported as being dumped on public land at Wood Lane in Camps Heath. Officers from East Suffolk Norse (formerly Waveney Norse) investigated and found letters addressed to a property in Lowestoft. When interviewed, the householders named Mr Jones as the person they had paid to remove waste from their shed and garden.

On 9 April 2018, a second quantity of household waste, mainly black sacks, furniture, plastic and cardboard boxes was reported as being dumped on private land at Border Lane, Ashby. Again, Norse officers attended the site and found letters addressed to a property in Gorleston. The occupants of this property named Mr Jones as the person who had arranged for waste to be removed from their premises, at a cost of £60.

When interviewed, Mr Jones admitted visiting the property in Lowestoft three times to remove waste. He claimed he had taken two trips to the Household Waste Recycling Centre and then after his third visit to the house, he lent his van to a friend. Mr Jones claimed his friend must have fly-tipped the rubbish without his knowledge. However, Mr Jones refused to name his friend and was therefore also charged with failure to provide details of the person he lent his van to.

Mr Jones was ordered to pay £379 in compensation to Somerleyton Estate and a further £400 to East Suffolk Council for the costs of removing the waste from both locations. He was also ordered to pay a £700 contribution to the Council’s legal costs.

Phil Gore, Head of Environmental Services and Port Health at East Suffolk Council said: “There is no excuse for fly-tipping in our beautiful countryside and we will always take action to find those responsible for incidents such as these. Whilst we would have preferred a stronger penalty reflective of the large amount of waste dumped, we are pleased that Mr Jones has been held accountable for his actions.

“Householders also have a ‘duty of care’ to ensure their waste is disposed of properly and to retain details of anyone taking waste from their property on their behalf. For both of these incidents, the householders were able to name the person who had removed their waste, ensuring Mr Jones was prosecuted for his selfish and irresponsible actions.”

Householders should always ask for details of the identity of any person removing waste on their behalf, as well as details of the vehicle used and check that the person is an authorised waste carrier. Failure to carry out these checks can unfortunately result in a prosecution if waste is found to have been fly-tipped.

You can check whether someone is a registered waste carrier here

Fly-tipping can be reported online here. 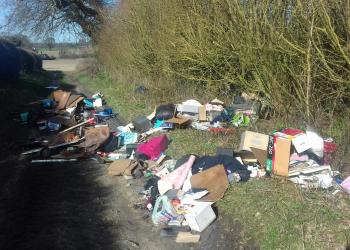