A Suffolk village’s fallen soldiers are commemorated in a special book to mark 100 years since the end of World War One.

Author, Shane Hines, launched the book, titled ‘Five Men of Burgh; The war dead of a Suffolk Village’ with support from Suffolk Coastal Cllr Tony Fryatt, who donated £500 from his Enabling Communities Budget to the project.

Shane Hines said: “I wanted to write the book to tell the stories of these ordinary men who were overtaken by terrible events. I am hoping the book will help in commemorating them and in appreciating the effect the two world wars had on their families and the local community.

“I was able to publish the book with the help of my local Councillor, Tony Fryatt from Suffolk Coastal District Council, and the Burgh Wood Trust and I am grateful to them for their support. I must also give special thanks to my daughter, Alice, who helped me with the design and layout of the book.”

The book tells the stories of five local men, as boys, men and then soldiers, who died in World War One and was commemorated on the war memorial at Burgh. It also features three further local men who died in the Second World War and whose names joined the original five on the memorial.

Cllr Fryatt reveals that he has his own connection to a man killed during World War One. The story of Captain Charles Algernon Fryatt has also been told in a book, titled ‘Captain Charles Fryatt: Courageous Mariner of the First World War’.

“A few years back someone printed a book about my ancestor, Captain Charles Algernon Fryatt,” he said.

“He was not in the services but sailed the ferry between Harwich and Holland. He was executed in Bruges for aggressive action as a non-combatant.

“This made me aware of the power these stories can have, so I wanted to support this project as it is a superb way in which to tell the real stores about the people listed on the memorial. I now feel like I know them and feel the pain and anguish caused by their loss.”

The book is available to buy from Browsers Bookshop in Woodbridge and Poor Richard’s Books in Felixstowe. Copies can also be ordered online. All proceeds go to charity. 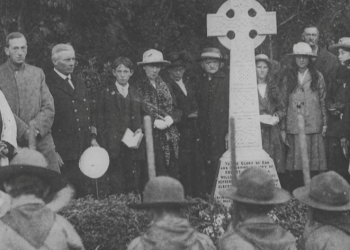