Plans were today revealed for the North Lowestoft Heritage Action Zone, which will see Lowestoft boosted by an injection of funds and the collaborative efforts of a number of local organisations keen to breathe new life into the area.

The five-year scheme, led by Waveney District Council and Historic England, will see grant funding go towards housing repairs and renovation, research into the history of the area, support for buildings ‘at risk’, and a community programme including public lectures.

The Heritage Action Zone includes the medieval High Street, the Scores (steep narrow paths in the cliff), historic smokehouses and net stores, and once fine Victorian parks. This historic part of Lowestoft was originally the main medieval settlement, grown around a thriving fishing industry, including merchants’ housing and commercial premises on the cliff top, and workers cottages and net stores below. However, over time industry declined, the Beach Village was repeatedly flooded, and the economic heart of Lowestoft moved southwards.

“Historic England is delighted to be working with our Heritage Action Zone partners to help revive North Lowestoft High Street.  The High Street is the heart of historic Lowestoft, and the Heritage Action Zone aims to revive the street, repairing its historic character and improving it for the benefit of everyone who lives and works here, and for those who visit the town.  We look forward to working with our partners to realise this ambition over the coming years.”

“We’re very proud that our Heritage Action Zone is now off the ground. We’re looking forward to involving local groups to really make the most of this scheme and to ensure that it benefits people in the local area. We want to help make Lowestoft an even better place for residents, businesses and visitors alike.”

"Lowestoft Town Council is extremely pleased to be a working partner in the Heritage Action Zone and to help jump-start Lowestoft’s heritage regeneration. The HAZ is a brilliant vehicle that will bring practical knowledge and investment to our historic buildings and parks, and I am personally thrilled with the opportunities I see for Lowestoft.”

There are now 18 Heritage Action Zones in villages, towns and cities across England. They have been identified by Historic England as places in need and where the historic environment can create economic growth and improve quality of life for people. 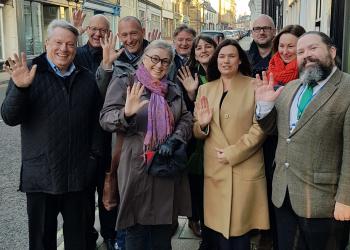