Following an independent examination of the Suffolk Coastal Local Plan, East Suffolk Council have been told it is ‘sound’ by a Government-appointed inspector.

The Local Plan sets out an ambitious strategy to guide and manage new development in the former Suffolk Coastal area in a sustainable and plan-led way. It proposes to deliver at least 6,500 jobs and 9,756 new homes over the period to 2036, supported by the delivery of appropriate infrastructure.

The inspection, which is the final stage before adoption, found the plan to be sound subject to some amendments.

Cllr David Ritchie, East Suffolk’s cabinet member for Planning and Coastal Management, said: “We welcome the Report and findings from the Inspector. The new Suffolk Coastal Local Plan has been in development since 2016 and this is a significant milestone for East Suffolk Council as it brings us one step closer to adopting a plan which, together with the already adopted Waveney Local Plan and Broads Authority Local Plan, will see the whole district covered by  up to date Local Plans;  together providing  a positive and planned approach to growth, particularly during these challenging times.”

The Final Draft Plan was approved by then Suffolk Coastal District Council in January 2019 and was then open to the public for final comments. These comments were considered by an independent planning inspector when the plan was submitted to the Government in March 2019, shortly before the creation of East Suffolk Council.

Public hearings were held in August/September 2019 and following this, the Inspector wrote to East Suffolk Council in January 2020 to advise that Main Modifications were needed to the Local Plan for it be ‘sound’.  The Main Modifications weropen to the public for comments in a ten-week consultation.

Following consideration of the responses for the Main Modification consultation, the Inspector published his final report on 8 September 2020, concluding the Local Plan as legally compliant and ‘sound’, subject to the Main Modifications being made to the plan prior to adoption.

East Suffolk Council’s cabinet will consider the modified Local Plan on 17 September, before the Local Plan is considered for adoption at Full Council on 23 September. 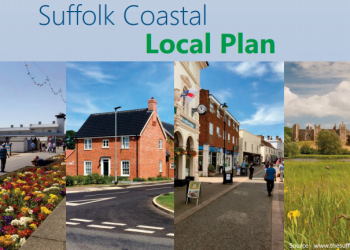