The London Road Lowestoft High Street Heritage Action Zone (HSHAZ) is one of seven historic high streets across the East of England which have been offered government funding to give them a new lease of life and help them recover from declining footfall and the impact of the Covid-19 pandemic.

The London Road Lowestoft HSHAZ programme will begin on 1 October and will complement the North Lowestoft Heritage Action Zone which has been running since 2018.

Cllr Craig Rivett, East Suffolk’s cabinet member for Economic Development said: “Lowestoft is an ambitious town with huge potential and a rich heritage. Within the past few months, we have secured £43 million of funding for flood defences, £750,000 for the regeneration of the East Point Pavilion, planning approval has been given for the Gull Wing (the Lake Lothing Third Crossing) and we have also seen the launch of the forward-thinking Town Centre Masterplan which provides a clear plan for positive change.

“The start of the new London Road Lowestoft High Street Heritage Action Zone programme is even more great news for Lowestoft and is another step towards an exciting future for the town.”

Alice Taylor, Kirkley Ward Councillor for Lowestoft Town Council said: “The addition of a new Heritage Action Zone to the south end of Lowestoft is a brilliant step forward in our community’s endeavours to protect our built heritage and regenerate Lowestoft. The benefits to the town’s economy can’t be downplayed and boosting our retail and tourist economy is more important in these days of retail upheaval and pandemics than it ever was.  It takes a while to get a HAZ scheme going and we’re just starting to see real changes in North Lowestoft. In a few years we’ll see the fruits of today's hard work in South Lowestoft.  A big thanks to Historic England, our councils and all of the volunteer groups and citizens that are a part of this HAZ community for the many, many hours they’ve contributed so far and will continue to give to this new South Lowestoft HAZ.”

On top of this £95 million, the government’s unprecedented £1.57 billion Cultural Recovery Fund will help to tackle the impact the pandemic has had on our most loved arts organisations and heritage sites and breathe new life into historic high streets across the country.

Culture Secretary Oliver Dowden said: "High streets sit at the heart of our communities and every part of the country deserves to have one they can be proud of. This fund will help breathe new life into high streets in towns and cities across the country - restoring them to their full glory so that they are beautiful places for people to shop, work and enjoy."

High Streets Minister Kelly Tolhurst MP said: “Our high streets are the beating heart of our communities and, now more than ever, have a crucial role to play in helping our towns and cities to recover from the pandemic.

“This new funding will help to transform and restore historic buildings, creating new homes, shops and community spaces, and reinvigorating local high streets up and down the country.”

It is not just the economic future and commercial confidence of the High Streets that is at stake. They have a long history of being the heart of places where local people meet, work, shop and feel part of something bigger.

The HSHAZ scheme includes £7.4 million to fund four years of cultural activities across the country to engage communities with their local high streets, and celebrate the role and importance of these historic areas as hubs of the community.  The Cultural Programme is led by Historic England, in partnership with The National Lottery Heritage Fund and Arts Council England.

The money will fund two arms of the programme; the first is grants distributed through cultural consortia set up by Local Authority partners. These consortia will work with artists and creative organisations local to the high streets to develop their ideas and deliver activity.

The second part of the programme is a series of national cultural commissions. Historic England is asking creatives to respond to briefs that include capturing the everyday spirit of high streets, and connecting high streets across the country; this will include a large-scale outdoor arts celebration of the high street and a four year photography commission to document the changing face of the high street. Further commissions will be announced in each year of the cultural programme.

The cultural programme has already facilitated pilot grants to produce work that will be revealed in the run-up to the crucial Christmas shopping season on local high streets. From art exhibitions in empty shop windows to street art trails bringing the high street back to life, poetry penned by local people appearing on pavements to residents voicing animations, they give a flavour of what high streets can expect over the next four years of the cultural programme.

Tony Calladine, Regional Director at Historic England in the East of England, said: "Whether it's a medieval market town, or a post-war city centre, every high street in England has a distinctive history that can be harnessed to help it achieve a prosperous future.

"Investing in heritage delivers good results for people – it means looking after and celebrating the places at the heart of our communities, and the buildings and public spaces which define their character. This investment for our historic High Streets Heritage Action Zone scheme will unlock the potential of these precious high streets and help them thrive again."

The HSHAZ programme will use some of the existing structures already in place through the North Lowestoft Heritage Action Zone. These include a Heritage Action Zone Partnership Board, with representatives from key partners including Lowestoft Town Council, Lowestoft Vision and East Suffolk Building Preservation Trust. As with the HAZ, the HSHAZ will offer opportunities for closer working between local organisations, joint initiatives and the sharing of resources and knowledge.

The North Lowestoft HAZ is a five-year programme focusing on some of the oldest parts of the town including the High Street and Scores. Together with residents and businesses, the project aims to improve the HAZ area by restoring historic buildings and kick-starting regeneration by celebrating the unique character and heritage of this part of the town. 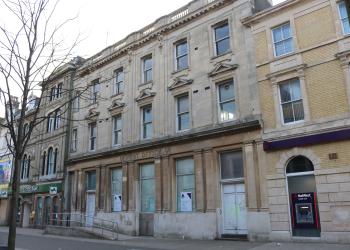