Once in a century opportunity for Lowestoft secured

East Suffolk Council is celebrating an incredible award of over £43 million by the Government - a 'once in a century' opportunity to deliver tidal flood walls and a tidal barrier to protect and safeguard the future of Lowestoft.

It is the largest single award to any scheme in the country, as part of an immediate £170 million pot for national flood protection projects which can get underway by 2021. The Lowestoft scheme will provide certainty for the prospects of the town, galvanising its huge economic potential and heralding a bright and secure future for residents and businesses.

East Suffolk Council has a transformative regeneration plan in place for Lowestoft, however flood risk has constrained economic growth in the town damaging the viability of key regeneration sites as well as threatening 825 businesses and hundreds more homes. However, the Lowestoft Flood Risk Management Programme (LFRMP) which has been seeking the funding it needs to proceed has now been given the green light, with a financial boost that will unlock multiple local and national growth opportunities. The scheme will significantly reduce the risk to economic activity, jobs, utilities, key infrastructure and energy operations for 100 years.

Cllr Steve Gallant, Leader of East Suffolk Council said that the news could not have been better: "Lowestoft is worth investing in. Its current location on the coast and the flood risks that this presents, have been preventing it becoming one of the UK’s greatest economic successes. The award of this funding will allow us to protect people and their homes and, significantly reduce the risk of flooding to over 825 businesses, unlocking further growth, creating jobs and apprenticeships and securing the future of Lowestoft for generations to come.

“Lowestoft, the UK's most easterly town, is at the centre of the world’s largest market for offshore wind energy. Lowestoft Port supports billions of pounds worth of offshore projects plus international trade. However, Lowestoft has had no formal flood defences and was severely impacted by the 2013 storm surge. The tidal barrier and sea walls will prevent the devastating floods we experienced in December 2013 happening again.

“The Prime Minister promised to build back better, build back faster and build back greener. Lowestoft will be at the heart of this with its contribution to the country’s green energy through the increasing development of the wind energy sector operating out of its Port. As a result of today’s very welcome news we will be able, alongside our partners Suffolk County Council, the Environment Agency and New Anglia Local Enterprise Partnership to build Lowestoft’s future without the fear of flooding from the sea, providing confidence to developers and investors. We see the award of this funding from Government as heralding a new economic dawn for our Town and our people and businesses. They deserve this after the devastating floods of 2013 and the recent COVID 19 pandemic."

New Anglia LEP is also a significant funder of the project, with £10m invested through the LEP’s Growth Deal. The scheme will support around 22,400 jobs and be worth £694m GVA per year to the local economy.

Chris Starkie, chief executive of the LEP, said the economic impact of the improved flood defences could not be underestimated. “As well as protecting homes and businesses in the town, this will enable investment and economic growth by protecting existing jobs and creating new employment opportunities.

“Clean energy is at the heart of this region’s economic strategy and Lowestoft has a significant part to play in that through the increasing development of the wind energy sector operating from its port. This investment is an endorsement of its economic potential.”

The design of the flood protection scheme will incorporate innovation, with glass flood walls at South Pier including words and artwork designed by local children to maintain the Town’s important connection to the sea. Work is expected to get underway next year. 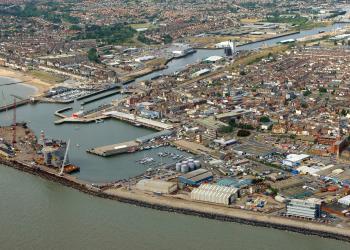