Bold new beach huts will put Lowestoft on the map

As part of wider work to regenerate the town, exciting and modern new beach huts are to be built at Lowestoft’s seafront.

At a meeting of East Suffolk Council’s Planning Committee North on Tuesday 18 May, approval was given for 72 contemporary beach huts to be built at Jubilee Parade.

Designed by Norwich-based architects Chaplin Farrant, the £2.6m project will create split level beach huts, which will face partially south to ensure maximum sunshine throughout the day. The tips of the structures will face eastwards, reflecting Lowestoft’s position as the most easterly location in the country.

A raised decking promenade will also be created to enable people to sit in front of the new huts without restricting access to those using the promenade. Ten of the most central huts will be designed to be more easily accessible.

Cllr Craig Rivett, East Suffolk’s Deputy Leader and cabinet member for Economic Development said: “The regeneration of Lowestoft’s South Beach includes bold, attractive designs which will put Lowestoft on the map and help it gain further recognition as a destination. Tourism is incredibly important to East Suffolk and these striking new beach huts will attract visitors from across the country, increasing footfall in the town centre, boosting the local economy and enhancing the lives of local residents.”

The Jubilee Parade project is one of several regeneration projects set out within the Seafront Vision, the South Seafront Masterplan and the Lowestoft Town Investment Plan.

The new beach huts will support other regeneration projects, including the repurposing of the East Point Pavilion into a cultural and community space.

Construction is expected to begin later this month with completion scheduled for August. Work to demolish the outdated concrete chalets, and to stabilise the cliff behind them, was completed earlier this year. 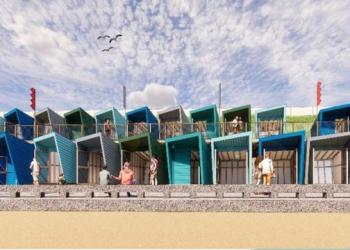