Temporary flood barriers which will reduce the risk of flooding in Lowestoft will be tested this week in readiness for the winter season.

A training exercise will be held at 6.30pm on Thursday 21 October to test the deployment of a section of the temporary flood barriers.

This year the exercise will be held at Commercial Road where approximately 100m of the barrier will be deployed. The flood barrier will be erected, disassembled and re-stowed as part of the nighttime exercise. Some parking restrictions will be in place, as well as some minor traffic management. Disruption will be kept to a minimum. The exercise will begin at 6.30pm and last approximately six hours.

Cllr David Ritchie, East Suffolk’s cabinet member for Planning and Coastal Management said: “It is essential that we regularly test these barriers in order to avoid the severity of flooding experienced by people and businesses in December 2013. If required, the temporary flood barriers are deployed in places around the town where flooding was at its worst at that time. Each year, we carry out a trial deployment to ensure we are ready to face the winter.

“Last year the Government awarded Lowestoft £43m to build permanent tidal flood walls and a tidal barrier. Until these are in place, we will deploy our temporary barriers to reduce the risk of flooding to people, homes and businesses.”

In 2016, 1400m of fully removable barriers were acquired using over £400,000 of funding secured by the former Waveney District Council from the Regional Flood and Coast Committee. The temporary scheme is designed to help reduce the risk of tidal flooding to people, homes and infrastructure whilst the permanent flood protection scheme progresses.

The barriers were purchased to provide protection for the town whilst a permanent flood scheme, known as the Lowestoft Flood Risk Management Project, is created. This scheme is underway, with construction now complete of flood walls and a pumping station to provide protection to houses previously flooded from the Kirkley stream. The first phase of construction of the tidal defences began in May, with phase two expected to begin construction in November. 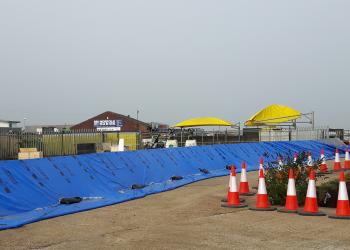