With a shared cultural history linked to the sea, beautiful beaches, historic buildings and bordered by the unique Broads National Park, Great Yarmouth Borough and East Suffolk Councils have joined forces for an exciting bid to become UK City of Culture 2025.

Announced today, their bid aims to showcase the region’s rich and multi-layered culture, its diversity, its people and their creativity, experiences, buildings and landscapes, opening them up to be enjoyed and engaged with by all and creating a cultural legacy for future generations.

Aiming to create a groundswell of enthusiastic support and engagement amongst everyone involved, it will play a key role in the efforts of both communities to overcome the challenges of low social mobility and disadvantage in the area, helping it to recover from the effects of the pandemic and forge new opportunities ahead, especially for young people.

The bid focuses on the resort towns of Great Yarmouth, Gorleston and Lowestoft which all have centuries of connection with the sea and the world beyond. Exemplars of the great British seaside, they are thriving visitor destinations which continue to welcome millions of visitors each year. These towns are integral to the UK’s renewable energy industry and are also centres of fertile creativity, rich heritage and cultural distinctiveness. Beyond them,  there is also a rich heritage and culture – both natural and man-made – from Aldeburgh and the Suffolk coast northwards to Winterton-on-Sea, coastal resorts and inland market towns, the Norfolk Broads and Areas of Outstanding Natural Beauty.

Great Yarmouth’s cultural offering features everything from street performance and festivals, to the circus and Golden Mile, mediaeval town walls and iconic entertainment venues, as well as fine sands and a fascinating maritime history with links to Nelson and the great herring fleets of the 19th century; while East Suffolk’s picturesque coastal and rural centres host renowned music events with a landscape which has inspired the works of authors, composers, artists and choreographers, and it is the place where each day’s new dawn rises first in the UK.

UK City of Culture 2025 is the first time a collection of linked or neighbouring towns have been eligible to apply together, and the joint bid has won the support of the New Anglia LEP, Norfolk and Suffolk County Councils, Norfolk Community Foundation, Norfolk and Suffolk Chambers of Commerce, the area’s three local MPs and many other major regional public sector stakeholders, arts and community organisations.

The two councils will file an expression of interest by next Monday, July 19. The decision on whether their bid has made it onto the long list will be announced in early September 2021, with the UK City of Culture 2025 winner being announced in May next year.

A successful bid will see the coastal region and its hinterland host a year-long programme of creative events and activities in 2025 to showcase its cultural offers to the world and bring people together with wider benefits felt across Norfolk & Suffolk in relation to the visitor economy. This year’s UK City of Culture 2021 host, Coventry, is anticipated to enjoy an economic boost of around £211 million, with an additional 2.5 million visitors to its region.

Both Great Yarmouth and East Suffolk councils are already committed to comprehensive programmes to attract unprecedented levels of investment into their area’s infrastructure and cultural sectors. Recently, the Government has awarded a total of more than £63m across the two areas by way of the Towns Deal, Heritage Action Zones and Future High Streets Programme funding in Great Yarmouth, Gorleston & Lowestoft.

In July 2020, the borough of Great Yarmouth launched its Culture, Heritage and Tourism strategy up to 2030 as Our Place Is Your Stage, and a number of major, high profile projects are set to come to fruition in the lead up to 2025. As it looks to the future alongside Lowestoft as the UK’s capital of offshore renewable energy, it has robust plans in place to activate its economic recovery by re-inventing its public places whilst retaining a sense of its rich heritage and diversity and tapping into and growing a thriving arts and cultural scene which will support new homes, nurture new jobs, businesses and opportunities to learn and grow.

East Suffolk has an equally strong and diverse community with an economy raring to take advantage of opportunities for future growth alongside major economic investment. An area with significant challenges of low social mobility and disadvantage, cultural-led regeneration sits at the heart of the ambitious Town Investment Plan for Lowestoft, with many projects set to be live by 2025.  Elsewhere, there is a growing range of cultural and heritage attractions in its market and coastal towns.

The programme planned for a UK City of Culture 2025 will include everything from visual arts, literature, music, theatre, dance, combined arts, architecture, crafts, design, heritage and the historic and natural environment, to museums, galleries, libraries, the spoken word, film, broadcasting and media, video games, animation, visual and special effects, photography and publishing.

Both communities already have a host of cultural experiences to bring to the mix, from live entertainment, music, circus, maritime and arts festivals and a newly-created summer solstice ‘First Light’ event, to historic sites and buildings, globally-important wildlife areas and inspiring landscapes which are increasingly attracting the attention of the film industry.

Leader of Great Yarmouth Borough Council, Cllr Carl Smith said: “Our borough and the district of East Suffolk share a very special sense of place and a local distinctiveness which sets us apart as truly unique. We have a connection to the sea and are also both going through a period of considerable change and regeneration as we work towards securing a better future for our communities, with a firm belief in the wealth of benefits that can come from putting culture at the heart of everything we do.

“Our bid will provide ambition for our residents, inspire people and steer them towards engaging with others and creating positive pathways, and this will be more crucial than ever in the challenges ahead for our communities as we work to recover from the effects of the pandemic and forge new opportunities for our young people. We are thrilled to be joining with our close neighbours in bidding to become the UK City of Culture 2025 and look forward to the journey ahead.”

Cllr Steve Gallant, Leader of East Suffolk Council, said: “This is an incredibly exciting opportunity for East Suffolk and Great Yarmouth and will reflect our continuing hard work to ensure the highest quality of life possible for everyone living, working and visiting our part of the East of England.

“We are fortunate to have a rich tapestry of cultural diversity right across East Suffolk and we are delighted to join forces with our friends at Great Yarmouth in this bid. Becoming City of Culture 2025 will bring real change, huge opportunities and significant benefits to our communities and will enable us to showcase all that we have to offer.”

Great Yarmouth
The borough of Great Yarmouth stretches from Winterton in the north via Great Yarmouth and Gorleston-on-Sea to Hopton-on-Sea in the south, encompassing the south Norfolk Broads and Breydon Water. Its seaside attractions range from traditional to cutting-edge.

It hosts the annual Out There festival (the UK’s biggest cultural gathering of circus and outdoor street arts), plus new for this year an Out There Fire On The Water extravaganza on the town’s newly-restored Venetian Waterways. Its circus-led offerings place it as the ‘UK Capital of Circus’, while its historic Hippodrome is Britain’s only surviving complete circus building and is still in regular use.

There are also a wealth of current and former theatres and venues which have played host to the great entertainers of the day, and the Great Yarmouth Arts Festival offers cultural activities, performances and collaborations, while the Maritime Festival celebrates the area’s links with the sea and the Wheels Festival showcases all types of classic and contemporary vehicles.

East Suffolk
East Suffolk is the largest district in the country and benefits from a diverse creative community working in unique locations across 126,000 hectares and 175 towns and parishes.

Lowestoft is the most easterly town in the UK and the first to see the sun rise at the summer solstice, hence its inaugural First Light Festival in 2019 attracted tens of thousands of visitors. It is also home to the Excelsior - an authentically restored fishing smack which is a member of the National Historic Fleet.

The area is the southern gateway to the Broads National Park via Carlton Marshes nature reserve which is under the custodianship of Suffolk Wildlife Trust. The Trust cares for nearly 8000 acres of some of Suffolk's most inspiring wild places, while important wildlife habitats include the coastal nature reserve of RSPB Minsmere and the Suffolk Coast and Heaths AONB.

East Suffolk also hosts major arts festivals including the Aldeburgh Festival, Latitude and events at Snape Maltings, one of the world’s leading centres of music founded by Lowestoft-born composer Benjamin Britten; while its iconic buildings include Norman castles at Orford and Framlingham (made famous as the ‘castle on the hill’ in a song by local boy Ed Sheeran), ancient monuments such as the Anglo Saxon royal burial site at Sutton Hoo, and other historic sites like Felixstowe’s Landguard Fort and Bawdsey Radar.

Both areas are fast becoming a favourite as film locations, with two recent major films being shot locally. The 2019 Beatles-inspired Yesterday features Halesworth, Shingle Street, Dunwich and Gorleston’s seafront; while scenes in the 2021 British film drama The Dig, telling the story of Sutton Hoo, were filmed around the real site near Woodbridge. 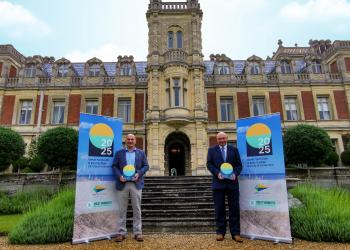