East Suffolk Council is delighted to have been awarded a £90,000 grant from Historic England as part of the London Road, Lowestoft High Street Heritage Action Zone (HSHAZ) to create and deliver community-led cultural activities on the high street over the next three years.

London Road, Lowestoft HSHAZ is one of more than 60 high streets to receive a share of £6 million for their cultural programme. Grants of up to £120,000 have been awarded to local arts organisations for cultural activity on each high street.

The cultural programme, “Wish you were here!”, will deliver an exemplar cultural programme covering both the London Road, Lowestoft High Street Heritage Action Zone, and the North Lowestoft Heritage Action Zone to showcase the character, heritage, and distinctiveness of both areas. The Council will work with a range of innovative cultural providers to deliver a variety of different art forms that will help connect local residents and young people to the heritage of the high street.

The cultural programme will run for three years, commencing June 2021, with communities uncovering stories such as Lowestoft’s long tradition as a seaside resort, commemorating the 1953 and 2013 floods, celebrating the 175th anniversary of the train station, looking at the development of the Post Office, as well as exploring the history of shopkeepers in the town.

This is part of the four-year-long High Street Heritage Action Zone’s Cultural Programme, led by Historic England, in partnership with Arts Council England and the National Lottery Heritage Fund. The Cultural Programme aims to make our high streets more attractive, engaging and vibrant places for people to live, work and spend time.

Culture Minister Caroline Dinenage MP said: "High streets are often the heart of our communities and should be places we all want to engage with and enjoy. These grants will help transform high streets into thriving cultural hubs, encouraging us to embrace all the joys our town centres have to offer."

Tony Calladine, Regional Director for Historic England in the East of England said: “The high street cultural programme is a step change in the way we think about bringing high streets back from the brink. As we start to see these important historic spaces become regenerated through building work, it is the community-led cultural work that helps people to enjoy their high street again and also have a say in what the future of their high street might be.”

Cllr Craig Rivett, East Suffolk Council’s Deputy Leader and cabinet member for Economic Development said: “This is yet more fantastic news for Lowestoft. Celebrating Lowestoft’s cultural and heritage assets is a key part of our plans to regenerate the town and we are looking forward to working with local people of all ages on a range of cultural activities throughout the programme.”

The funding builds on the success of a series of pilot cultural projects that have run since last August across 43 High Street Heritage Action Zones. They have not only helped high streets offer cultural activity during lockdown, but also discovered what local people would like to see happening on their high streets. 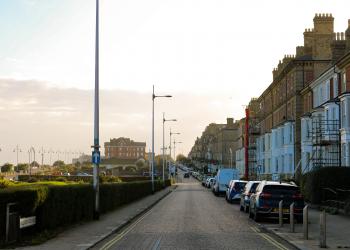