Members of the Historic England Commission, the organisation’s governing board, visited Lowestoft on Thursday 15 October to see how important local heritage sites are being restored and rejuvenated for the benefit of the town’s community and growing visitor economy.

Members of the Commission were keen to understand the issues affecting the seaside town and how collaborative partnerships and heritage-led regeneration can create positive change.

Commissioners were joined by Chief Executive Duncan Wilson and colleagues from across Historic England.

Commissioners heard about the continued renovation of Lowestoft’s historic railway station and revitalisation of the seafront, integral to the town’s character.

A tour of the London Road, Lowestoft High Street Heritage Action Zone included the previous Tuttles Department Store building and the Grade II listed former Post Office, both of which are planned for restoration and revival.

Exploring the North Lowestoft Heritage Action Zone, Commissioners visited the Grade II listed Town Hall and heard about plans to restore this important architectural landmark and bring it back into public use.

Commissioners explored the historic Crown and Mariner’s Scores and visited the atmospheric former Chemist Shop on the High Street. A rare example of a mid-Victorian chemist shop and an important part of Lowestoft’s rich social history, it has been recently restored and hosts regular open days for visitors.

Communities will uncover stories such as Lowestoft’s long tradition as a seaside resort, the 1953 and 2013 floods, the 175th anniversary of the train station and the development of the Post Office, as well as exploring the history of shopkeepers in the town.

Sir Laurie Magnus, Chair of Historic England, said: “It has been hugely rewarding for my fellow Commissioners and I to see the collective vision for Lowestoft’s heritage regeneration and the number of landmark historic properties that are to be restored and reused, including the Town Hall, Post Office, Railway Station and seafront that are all part of the town’s special character. I am really pleased that through the North Lowestoft Heritage Action Zone and the London Road, Lowestoft High Street Heritage Action Zone, Historic England is supporting the positivity and commitment to the town’s revitalisation that we’ve seen here today. Heritage can not only contribute to long-term growth, but also has the power to improve lives.”

Councillor Steve Gallant, Leader of East Suffolk Council said: “Culture and heritage are crucial parts of our ambitious plans for regeneration in Lowestoft, and we are pleased to be able to today share the hard work taking place within both of Lowestoft’s Heritage Action Zones. This includes the delivery of a three-year cultural programme, which will involve residents, schools and businesses in a range of exciting arts projects celebrating the people and unique character of the HAZ areas.”

Councillor Alice Taylor, Lowestoft Town Council said: “It’s lovely having the Historic England Commissioners visit and I know they’ll get a warm Lowestoft welcome. We're always talking nowadays about virtual this and Zoom that, but there’s nothing like getting some sand between your toes, smelling that clean sea air, and seeing what Lowestoft has to offer in real life. Lowestoft has a fantastic natural environment, a deep heritage and a hard-working citizenry and with so many exciting new schemes coming on board that will enhance all of these assets the Commissioners have a lot to see. While Historic England’s brief is about preserving our heritage, they also know that historic preservation is not just about the past, but how preserving our past can help places like Lowestoft move to a brighter future." 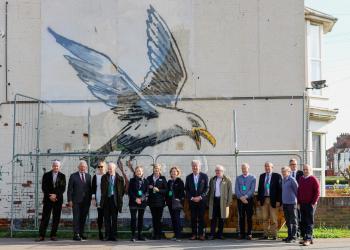