Following a thorough recruitment process, East Suffolk Council is delighted to announce the names of four independent members of the Southwold Harbour Management Committee - a newly formed body, responsible for the running of the Harbour on the Council’s behalf.

Public consultations established the relevant skills required for these roles and applicants were expected to possess an interest, or experience, in public service and be committed to developing the sound management and interests of the harbour, including its financial viability, the management of its assets and all other aspects of good port governance.

Interviews for the roles took place earlier in May and, with ratification by East Suffolk’s Cabinet, the chosen four will join five councillors on the committee, all of whom were assessed by a three-person Appointments Panel.

Cabinet Members who were interested to serve were requested to complete a Skills Audit form, setting out their suitable skills and, on that basis, it was objectively assessed that Cllrs Craig Rivett, James Mallinder, Maurice Cook, David Ritchie and Letitia Smith meet the criteria required.

It was also unanimously agreed by the Appointments Panel that the following candidates be recommended to Cabinet for their appointment as independent, co‐opted members on the HMC: Mr Alistair MacFarlane, Mr David Gledhill, Mr Richard Musgrove and Mr Mike Pickles.

Cllr Steve Gallant, Leader of East Suffolk Council said: “I am absolutely delighted that we have been able to appoint a fantastic group of individuals with a wide range of appropriate skills and experience, to the first ever Southwold Harbour Management Committee.

“The appointments process was thorough and transparent, and each appointee needed to fulfil a clear and strict skills audit to ensure their suitability for such an important role.

"This is a really exciting time for Southwold Harbour, and we have been working tirelessly to secure its future. This is the latest step on that important journey.”

A historic agreement to create the committee was reached in March 2020 by Waveney District Council (predecessor authority to East Suffolk Council) and Southwold Town Council. It was supported by local harbour users and was designed to safeguard its future, ensuring more local involvement and engagement in the management and delivery of harbour operations.

Southwold Harbour forms part of the Southwold Harbour Lands, which also includes the relevant stretch of the River Blyth, Buss Creek, Salt Creek and parts of Southwold Caravan Site – as well as commercial properties leased to independent operators to generate rental income for the harbour. 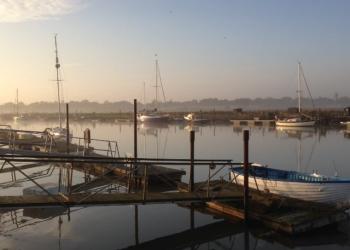