Book a lift with Buzzabout

A new community transport service has been launched to help people living in the villages north of Lowestoft to get out and about more easily.

Using a 16-seat minibus, Buzzabout can be booked to pick people up at existing bus stops, from their home or anywhere else they need and take them exactly where they want to go, including into Lowestoft town centre, Somerleyton and Lowestoft train stations, the Tesco superstore at Leisure Way, Somerleyton Hall or into other neighbouring villages. Buzzabout is fully accessible, including for wheelchair users.

East Suffolk’s Community Partnerships set up a Transport and Travel group to identify parts of the district lacking in rural transport and are working across East Suffolk to introduce new on-demand transport options.

A recent survey found that 23% of residents in the villages to the north of Lowestoft do not have access to a car or traditional public transport, leaving them feeling isolated and dependent on other people. Buzzabout has been launched as a direct response to this issue, to help people of all ages access shops, services and social activities more easily.

Cllr Norman Brooks, East Suffolk Council’s cabinet member for Transport said: “Introducing new on-demand transport options for those living in rural communities where there is limited public transport is one way in which we are tackling social isolation, which can have a real impact on people’s mental and physical health. Shared transport is also cheaper and better for the environment than using a car, especially for short journeys.

“We are delighted to have launched Buzzabout which will help people of all ages travel independently to groups and activities where they can meet others, as well as carry out everyday tasks such as shopping and attending appointments.”

Buzzabout fares are discounted until July 2023; a return trip from Lound to Lowestoft is just £4.00. Payment can be made when boarding the bus, using either cash or contactless payment.

Cllr Paul Ashdown, Chairman of the Lowestoft and Northern Parishes Community Partnership who have contributed to the development of the service, said: “This service is for those in rural areas to get into surrounding villages and the town, but also encourages those in Lowestoft to use the service to visit family, friends and attend events or functions in the rural communities. We hope the service will also encourage passengers to visit the countryside for walks and fresh air and experience the beautiful Suffolk rural areas.”

The new service was launched on Sunday 3 July at the 25th anniversary celebrations for Bungay-based BACT. BACT provides transport for people living in the north of Suffolk and part of south Norfolk, for whom other forms of public transport are not easily available.

BACT manager Debbie Blowers said: “We are delighted to have received the funding from the East Suffolk Community Partnerships to run this vital service in the rural areas north of Lowestoft where bus services have been reduced and left passengers without easily accessible transport options. Our driver, Eddy, is looking forward to welcoming passengers on board the service and will greet you all with a smile!”

Find out more about Community Partnerships. 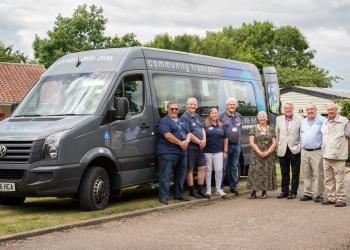