The winners of a prize draw held as part of a community litter pick scheme in East Suffolk have been announced.

East Suffolk Council is keen to encourage, enable and reward people to show more love for the environment we live in. As part of the ‘Love East Suffolk’ scheme, community groups have a winning way of cleaning up their neighbourhood while helping themselves.

Last year a total of 170 litter picks were carried out in East Suffolk by 133 community groups. In the ‘Love East Suffolk’ scheme, funded through the Council’s partners, East Suffolk Norse, those that carried out litter picks between 1 March and 31 May 2019 were entered into a prize draw with the chance to win £200 for the benefit of the community.

“A bit of time and effort can make a big difference to an area, not only for the people who live there but the wildlife too – it is a great way to give something back to your local community and I hope that other residents appreciate the efforts of those who voluntarily pick up litter.

It is a shame that this is needed in the first place and it would be much better if everyone took a bit more responsibility for their own rubbish and disposed of it correctly, using litter bins or taking it home, instead of other people having to pick it up for them.

As always, we support groups that want to take part in litter picks by providing them with litter picking equipment and collecting the waste on their behalf. This service is available at any time of the year – not just during the spring.”

The Love East Suffolk initiative will be repeated again this year and any community groups that take part will receive £20 for their nominated community fund or charity and will be also be entered into a £200 grand prize draw. More details will be released in the spring.

East Suffolk Norse can provide volunteers with equipment to groups on request and will also arrange for gathered litter to be collected. Litter pick sticks, bag hoops and green vests can also be loaned out, subject to availability. 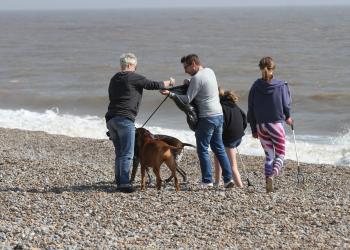