Having been damaged during an appalling arson attack last year, a historic shelter on Felixstowe’s South Seafront has been reopened to the community.

The shelter, along with the nearby Arwela shelter, were fully refurbished in 2018 after suffering significant timber decay, vandalism and weather damage over the years, exacerbated by flooding during tidal surges. This £150,000 project was part of the Council’s ongoing investment in the South Seafront area.

In October 2020, the Manwick shelter suffered extensive damage during an arson attack, which was condemned by local residents, the Leader of East Suffolk Council Cllr Steve Gallant and the Mayor of Felixstowe, Cllr Mark Jepson.

Speaking about the reopening, Cllr Gallant said: “Local residents were clearly disappointed and upset over the appalling damage to this much-loved amenity, as were we and we wanted to get this historic shelter back into working use as quickly as possible for the benefit of the community.

“Mindless vandalism, carried out by a selfish few, is completely unacceptable and especially in this case as the shelter had only recently been restored. However, I am delighted that Manwick is back in use and is once again open for residents and visitors to enjoy.”

Cllr Mark Jepson, Mayor of Felixstowe, said: “It is fantastic to see the historic Manwick shelter recovered to its former glory. These singular and senseless acts of vandalism are not only appalling, but they undermine our community. The shelter is a much-loved and well-used amenity, and it will be wonderful to see visitors and residents alike enjoying it once again.” 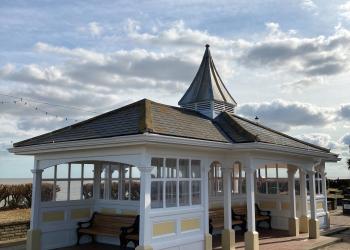