Behind the scaffolding at Lowestoft’s historic Post Office building

A skilled team of builders, conservators and craftspeople are forging ahead with restoration work to the outside of Lowestoft’s former Post Office building, as part of an ongoing programme to unlock the potential of historic high streets.

The intricate process of repairing the Grade II listed Victorian building’s exterior began in January this year – with financial backing from East Suffolk Council and Historic England, as well as the government’s Towns Fund.

Along with air lime repointing, consolidation and mortar repairs to save as much of the original stone as possible, the work currently involves the removal of algae, lichens, sulphation crusts and dirt, as well as painstakingly stripping back a linseed oil surface coating applied to the building for weather protection.

Katie May Langridge, Senior Architectural Conservator at Aldis and May, said:

“When the scaffolding went up, and we were able to undertake a full survey, we realised the stone was in a worse condition than was first thought.

“We think the linseed was applied at some point in the twentieth century, but instead of protecting it, discoloured and made the building less permeable, leading to decay. We’ve been using a chemical pack that reacts with the oil to form a soap, allowing it to be removed with water. It’s a very labour-intensive process but the results are well worth it.

“It’s still a mark of the building’s quality that it has survived this long – and we can learn much about the materials and techniques used back then.

“It’s a landmark building which was a significant part of the local community for many years when everything was done by post.”

Elsewhere, cement has been removed from areas patched-up over the years, and a sacrificial sheltercoat applied to protect the more vulnerable areas of masonry. On the seventh storey of scaffolding, roof tiles have been stripped away before being replaced and reinsulated.

Interior renovation work is due to begin next year, following the completion of external construction and repairs.

“Being able to transform this historic and important site has been a pleasure for the whole team to work on.

“Work is progressing well, with stonework replacement underway in various areas including the front façade, new Welsh slate roof coverings being laid and refurbishment and restoration work taking place on all windows, with the original glass and traditional craftsman techniques being used.

“We have also enjoyed giving the local community the opportunity to take part in educational workshops showcasing some of the traditional crafts and skills required to maintain these incredible buildings.”

“It’s great to see work progressing on the restoration of this grand old building in the heart of Lowestoft.

“It’s equally satisfying to know that many of the techniques being used to restore the building have been honed locally and that we’ve been able to source those skills in the surrounding area.

“This is just one of numerous ongoing projects to transform and enrich the town of Lowestoft – and I can’t wait to see the old Post Office looking as impressive as the day it began serving the local community all those years ago.”

“The revitalisation of the former Post Office is a flagship project for the London Road, Lowestoft Heritage Action Zone.

“It’s wonderful to see repair work progressing so well, and fascinating to learn about the craftmanship that was employed to create this important building.

“I’m delighted that local people are getting a chance to see, close at hand, the skilled restoration work that is being carried out and to learn more about the history of the Post Office building, which has such stories to tell of its role at the centre of community life.” 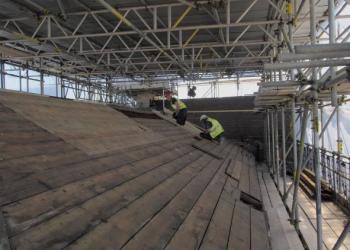