A Lowestoft resident has been fined £1,500 for two offences relating to accumulations of household waste at her property.

At a hearing at Great Yarmouth Magistrates' Court on Thursday 30 January, Margaret Stevenson of Grosvenor Road, Lowestoft was found guilty of breaching a notice made under Section 5 of the Prevention of Damage by Pests Act 1949 and breaching an abatement notice under Section 80 of the Environmental Protection Act 1990 for failing to remove household waste from premises.

Ms Stevenson did not attend court but had entered a guilty plea by post. The court fined Ms Stevenson a total of £1,500, comprising £1,100 for the costs of removing the waste and £400 in costs. Due to Ms Stevenson’s personal circumstances, a separate fine for the offences was not imposed.

“Rats and mice can carry disease and cause damage to property so it is important to control them. The most effective way of preventing rats and mice from becoming an issue is to ensure household waste is disposed of correctly. As well as disposing of waste in the household bins provided to each home, items can be donated to charity, taken to a recycling centre and larger items can be collected using the Council’s bulky waste scheme.

Anyone who is struggling to manage their household waste, or who needs advice on how to dispose of a particular item, is urged to contact the Council so that help can be provided before the situation escalates.”

In March 2019, East Suffolk Council’s Private Sector Housing team visited a property in Grosvenor Road, Lowestoft following a complaint from a member of the public regarding an accumulation of rubbish outside the property.

The occupier, Ms Margaret Stevenson, was asked to clear the rubbish and lawfully dispose of it.

Further waste accumulated throughout the following months and in May, the Council served a notice under the Prevention of Damage by Pests Act 1949 on Ms Stevenson.

The notice required Ms Stevenson to remove, to an appropriate refuse disposal site or similar, all the rubbish which constitutes household waste and other waste materials that could attract, provide food and provide harbourage for pests from her front and rear gardens by 18 June 2019.

On 2 July, Ms Stevenson contacted the Council claiming the accumulation of waste was caused by the Council not collecting her bins for 3 months. However, Ms Stevenson had not reported her bin as missed at any point. Ms Stevenson was advised that if she could remove or significantly reduce the amount of waste by 12 July, then no further action would be taken. The waste was not removed and on 7 August, an East Suffolk Norse cleaning crew cleared any waste which had the potential to attract rodents.

In October, a new complaint was received regarding a further build-up of waste and an officer from the Private Sector Housing team found approximately 10 black bin bags in the rear garden, along with other waste. As this was deemed to be a statutory nuisance, an abatement notice was served on Ms Stevenson requiring her to remove all bagged waste, all loose waste and all flammable items from the curtilage of her premises and to dispose of the waste in a lawful manner by no later than 5 November 2019.

Between 6 November and 18 November 2019, Ms Stevenson breached the abatement notice by failing to remove all bagged and loose household waste and all flammable items from the curtilage of the premises and dispose of the waste in a lawful manner at an appropriate household waste site. Ms Stevenson had therefore committed an offence under Section 80(4) of the Environmental Protection Act 1990. 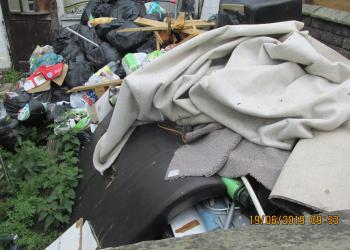