An exciting project to restore the façade of Lowestoft’s former Post Office, now owned by East Suffolk Council, is set to start later this year.

A planning and listed building consent application has been submitted on behalf of East Suffolk Council to seek permission for the scheme and, if approved, work is intended to start in the winter. These repairs will be funded through the London Road, Lowestoft High Street Heritage Action Zone, financed by Historic England and East Suffolk Council, delivered in partnership with Lowestoft Town Council and East Suffolk Building Preservation Trust.

Cllr Craig Rivett, East Suffolk’s cabinet member for Economic Development, said: “This building is an important symbol of Lowestoft’s past and an essential part of its future. By carrying out this restoration work to the façade, we will not only improve its appearance significantly, but we will also help ensure that this wonderful piece of architecture and history can be enjoyed by future generations for years to come.”

Tony Calladine, Regional Director for Historic England in the East of England, said: “We’re pleased to support the repair of the Post Office and to see work start to bring this historic Grade II listed building back to life. As we look to the future of such a significant building in the Lowestoft streetscape it’s a great opportunity to creatively celebrate the importance of the post office to the town and its people.”

It was built as a central Post Office for the town and served to combine several of the more provincial post offices which existed across the town prior to the 1880s. The building has gone through several phases of development between the 1880s and early 20th century and work will be starting this year to repair the fabric of the Grade II listed building and restore the original appearance of the Post Office.

The High Street Heritage Action Zone is also delivering a programme of cultural activity though the remaining three years of the HSHAZ project and is thrilled to announce the commencement of Letters from the Past, a collaboration between First Light Festival and nationally acclaimed poet, Luke Wright. Letters from the Past will create a ‘love letter’ to Lowestoft’s iconic post office whilst conservation repairs are underway.

The project will draw on archives and local memories, with Suffolk based poet and Fringe First and Stage Award winner Luke Wright creating a new long form poem that salutes the role the post office played in the town’s history. The poem will be designed into book form with a specially commissioned drawing to commemorate the Post Office.

Genevieve Christie, Director of First Light Festival C.I.C. said: "We are delighted to be working on this project that explores the past of the London Road North Post Office.  We look forward to delving into its history, sharing local memories and celebrating it, through exciting new writing and original artwork". 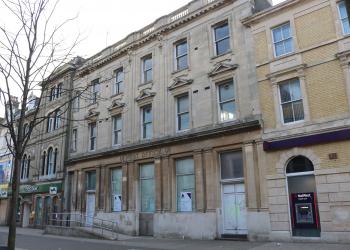