Visitors to Felixstowe’s Langer Park are now able to enjoy the use of two newly unveiled and uniquely designed benches.

The bespoke curved benches have been installed as part of a series of improvements commissioned by East Suffolk Council (ESC).

Each bench was handmade by furniture designer and maker Tim Germain, using oak felled locally on a needs-must basis at an area of mature woodland, called The Grove, by Greenways Countryside Project volunteers.

The benches’ creator (pictured left with his dog, Chocco) was joined for their official unveiling by Eastern Felixstowe councillors Mark Jepson (right) and Steve Wiles (centre).

Cllrs Jepson and Wiles both hope the visually impressive benches will be enjoyed by local residents and visitors for generations to come.

The unveiling is just the latest element of a wider project to improve the park by creating a welcoming, green space that can be used by residents and visitors to relax, exercise, catch up with family and friends, or admire the local wildlife.

In recent weeks, improvements have included the clearance of overgrown areas at the entrances, along the footpath and around the toilet block, which is currently undergoing renovation and due to reopen in late summer.

Founder of The Bench Project, Mr Germain’s ongoing projects include a joint commission between Britten-Pears Arts and the Suffolk Craft Society (SCS) for outside Snape Maltings to mark the 50th anniversary of the SCS and the completion of the Maltings’ new flood defences.

The new benches in Langer Park were commissioned to coincide with the Queen’s Green Canopy initiative to mark the Platinum Jubilee. In recognition of the scheme, which also saw the planting of seven oak trees in the park, Mr Germain incorporated a green-stained seat back to mimic the skyline of a stand of trees.

“It was a pleasure to work with East Suffolk Council on this bench project," he said.

“My benches are made to last decades but, also, are never straight. Instead, they are curved to align the sitters in a way that encourages conversation, as my small contribution towards battling loneliness.

“Every time I visit Felixstowe with my family over the coming years, I will nip along and hope to see it become a much-loved community asset, in what is a hidden gem of a park.” 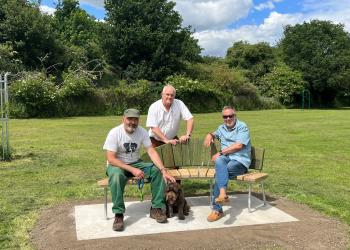