£24.9m regeneration programme given go ahead

In 2019, Lowestoft was chosen as one of 100 UK towns to benefit from the Government's £3.6 billion Towns Fund. Each town was invited by the Ministry for Housing, Communities and Local Government (now the Department for Levelling Up, Housing and Communities) to develop a proposal for a Towns Deal, with up to £25 million available to bid for.

In 2020, a Town Investment Plan which sets out Lowestoft’s ambitions, opportunities and challenges over the next ten years was submitted to the Government as the basis of a £24.9m application to the Towns Fund, focusing on five transformational regeneration projects.

The full funding was provisionally secured in March 2021, in which a Town Deal was agreed in principle with Government, subject to the completion of detailed businesses cases for each of the five projects. These were completed in March 2022 and all five projects have now received final approval from Government.

Cllr Craig Rivett, East Suffolk’s Deputy Leader and cabinet member for Economic Development said: “Securing £24.9m through the Government’s Town Fund was great news and since then, there has been a huge amount of work ‘behind the scenes’ to prepare a detailed business case for each of the five major regeneration projects. Receiving Government approval for all of the business cases is incredible news and means we can now move forward at pace with our ambitious plans to enhance the town, driving economic growth and attracting future investment.”

The five projects are:

All five projects have now advanced to the design phase and in the coming months, residents, businesses and visitors will be able to view proposed designs and learn more about each project.

The Lowestoft Town Investment Plan was developed in partnership with the Lowestoft Place Board, which comprises representatives from public, private and voluntary organisations and is overseen by East Suffolk Council.

Stephen Javes, Chairman of the Lowestoft Place Board said: “Over the past two years, the Lowestoft Place Board has been working with officers at East Suffolk Council to secure the Towns Deal. Firstly, through the development of the Town Investment Plan and then by endorsing the business case for each project. We will continue to monitor and evaluate the delivery process and are excited to see the opportunities this brings to the town as well as looking to add value that improves the town beyond the Deal.”

Waveney PM Peter Aldous said: “It is great news that these five major regeneration projects have secured final Government approval and construction work can now get under way. It’s necessary to thank all those who have worked so hard in preparing the business cases for each project as they have left no stone unturned to get to this stage.

“Lowestoft faces both tremendous challenges and opportunities in the coming years, and projects like these will help us to address the former and to take advantage of the latter. I shall continue working with local councils, the Government and businesses to ensure that the necessary policies and support are in place, so that the town realises its full potential for the benefit of the whole community.”

Lowestoft Mayor and Town Councillor Alan Green said: “Lowestoft Town Council is delighted to be working with East Suffolk Council on this funding designed to benefit Lowestoft people, business and visitors. The inclusion of our assets, including the Marina Theatre and Town Hall (the latter with generous contributions also from the National Lottery Heritage Fund, Historic England and Architectural Heritage Fund), should make a significant contribution to transformation work underway.”

“The LEEF project, which recently won ‘Best Project’ in the regional Royal Town Planning Institute (RTPI) Awards for Planning Excellence 2022, has the potential to attract many supply chain companies to Lowestoft and create an offshore renewable energy cluster, bringing new jobs and prosperity to the area.”

All projects are due to be completed by March 2026. 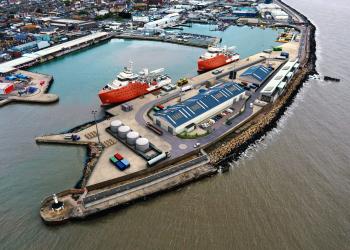