A new campaign aimed at getting young people to talk about their mental health has been launched in Kesgrave thanks to a donation from a local district councillor.

The aim of the campaign is to encourage parents and friends to talk to their children about mental health and to highlight the services available to young people in Kesgrave who may be struggling mentally for various reasons.

Fronting the campaign is a powerful self-portrait, titled ‘Behind the Mask’, which has been created by 18-year-old Maisie Jones, who herself has struggled with anxiety and depression throughout her teens. She has cleverly used words from her own personal journal for the poster to show other young people that they are not alone in dealing with these issues.

Maisie Jones said: “When I was 12, I was diagnosed with anxiety, and that had come from watching a loved one become quite ill and eventually pass away. Just from the anxiety and struggles of school I spiralled downhill and ended up being diagnosed with depression at 15, which was difficult, but I am out of the thick of it now.

“I struggled in silence for so long, so that when things got so bad, I didn’t know where to turn to. I think this poster will definitely grab people’s attention and make them realise there is somewhere they can go, even if they don’t want to speak to someone, they know about it."

Initially, the poster will be distributed to every household in Kesgrave and Rushmere St Andrew with banners placed around key locations in Kesgrave to raise awareness and normalise conversations about mental health.

Cllr Debbie McCallum said: “As we continue to face the ongoing challenges of Covid-19, it has never been more important for our young people to talk about how they’re feeling mentally and if they’re struggling internally, whether this is due feeling isolated or alone, a broken relationship or domestic issues.

“The aim of this campaign is to encourage parents and friends to start that difficult conversation with their children by using the ‘Behind the Mask’ poster as a starting point – asking them if they have ever felt like that or what do they think of the words on the poster.

“Unfortunately, I think a fair few young people have been experiencing mental health issues for the first time during the pandemic and it is important that we put an end to the stigma that often goes alongside it and let them know that it is okay to not feel okay. If we can sustain just one life or a few people, then it will all have been worthwhile.

"This isn’t just a picture, it’s Maisie's story and her journey. It’s a very brave message, and I know Maisie wants to help people and I think this is a very powerful message."

A total of £412,500 has been allocated from the New Homes Bonus (funding generated through new houses built in the district) for 2021/22, giving each councillor an Enabling Communities Budget of £7,500 to spend on community projects or to develop new projects in their ward to tackle local need.

Previous projects which have benefitted from Enabling Community Budget funding include play areas, village hall refurbishments and equipment, community events, projects supporting people with disabilities and the purchase of defibrillators. 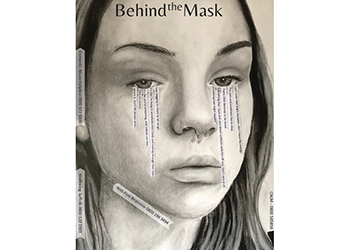