An East Suffolk resident has been fined over £2,000 after being found guilty of abandoning a caravan in a Felixstowe street.

Craig Friston from Felixstowe appeared at Suffolk Magistrates’ Court on 26 September, having been charged with breaching section 2(1) of the Refuse Disposal (Amenity) Act 1978.

On 20 October 2021, East Suffolk Council’s Customer Services team received a report of an abandoned caravan on land off Reedland Way in Felixstowe.

A site visit was carried out on 21 October and the caravan, which was in poor condition, was found to be filled with rubbish. Waste was also present on the surrounding ground.

Subsequent visits found that the caravan had been abandoned by Mr Friston and on 6 December, Craig and Samantha Friston were sent notices to remove the caravan within seven days.

The caravan was not removed and in January, the caravan and waste, which included a double mattress, was removed by East Suffolk Council from Reedland Way. In total, the Council removed 1,520kg of waste from inside and around the caravan - some of the waste showed Mr Friston’s name, and the names of family members.

Cllr James Mallinder, East Suffolk’s cabinet member for the Environment said: “As well as being unsightly, abandoned vehicles are a safety hazard and a nuisance to other residents and should always be disposed of properly. Caravans in good condition can be sold or even donated, and those in poor condition can be removed by a specialist company.

“There is absolutely no excuse for shamelessly dumping a caravan in a residential street for someone else to clear away, and to then fill it with piles of rubbish is simply unacceptable.”

Mr Friston did not attend sentencing and the court found him guilty in his absence, fining him £660 for the offence, £66 for the victim surcharge and £1,380 in costs, totalling £2,106. 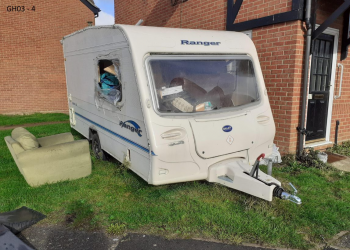