Public and private sector partners are working towards delivering transport and infrastructure improvements in and around Lowestoft as part of plans to position the town as an economic force in the region.

Addressing existing and potential issues within the town, the Lowestoft Transport and Infrastructure Prospectus provides the template to deliver a range of improvements and facilitate economic growth in the town. Supported by business leaders in both the district and the county as a whole, its primary focus is on road, rail and port infrastructure improvements, as well as long term flood mitigation to stimulate development and create jobs in areas designated for growth.

In order to serve the needs of existing key sector businesses, accommodate planned growth and to attract the potential growth from developments in the Southern North Sea, it will be necessary to make significant investment in road infrastructure within Lowestoft and on the main access roads serving Lowestoft including the A12 and A47. Improvements to the main road network serving Lowestoft have been identified as well as unlocking pinch points and the re-routing of traffic away from congested areas.

The future prosperity of the town demands much better rail services to the regional centres of Ipswich and Norwich and for connections to London and onto the wider rail network. This will require sustained investment in infrastructure and services including improvements in the infrastructure such as track, signals, level crossings and stations.

The threat of flooding is of major concern to both residential and commercial property owners and occupiers in the town. Lowestoft faces the threat of both fluvial and tidal flooding separately and in combination and flooding can also occur when high tides and severe rain / snow occur at the same time due to the closure of surface water outlet flaps. The strategic flood protection proposals within this prospectus are intended to address such issues

For investment and future prospects, Lowestoft’s biggest asset and opportunity is it’s proximity to the southern North Sea. Major opportunities exist, particularly in support of the offshore wind farms, and these have the potential to create significant employment and business opportunities.  The port and the town need to ensure that these opportunities are maximised which is best achieved by removing obstacles to growth, such as limited draft adjacent quays, clear width through the bascule bridge and the need to upgrade quay headings to meet changes in industry demands.

A key characteristic of Lowestoft is that around 80% of people who work in the town also live there. Lowestoft is quite compact and this means that journeys to work, which happen at the busiest times, tend to be short.  This means that many journeys, particularly at the busiest times, could be taken without the car.  The aim of this theme is to improve the travel choices that people can make – by providing better routes for cycling and walking for shorter trips and by promoting the use of trains, buses and car sharing for longer trips 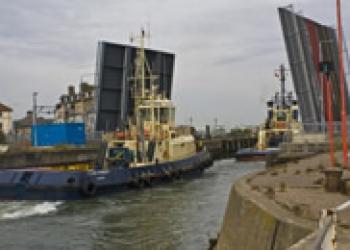