Hundreds of international riders turned out to take on the obstacles, bridges, muddy descents and gruelling inclines of a purpose-built circuit over the weekend.

The East Suffolk Council sponsored event was supported by the world governing body for sports cycling, the Union Cycliste Internationale (UCI), and hosted by the Eastern Cyclo-Cross Association alongside Trinity Park Events.

On Friday and Saturday, the field was open to riders aged over 35 who no longer race as part of an elite professional team, with open races for riders of all ages taking place alongside a Special Olympics Cyclo-Cross event on the Sunday.

Ahead of the event, Cllr Smith said she was delighted to welcome spectators and participants on behalf of East Suffolk Council, adding:

“As a local authority, we have a rich history of supporting major cycling events, which not only draw economy boosting crowds, but hopefully encourage more people to realise the many benefits of taking up cycling.”

Following the weekend’s racing, organisers thanked spectators, riders and helpers for making a huge success of the event, which was staged following a two-year forced hiatus due to Covid-19. 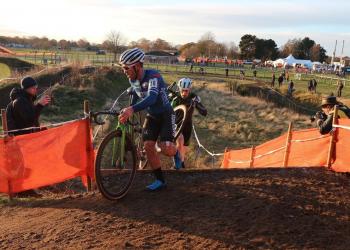