Legacy for the future from Banksy’s East Coast Spraycation

World-renowned artist Banksy creates a splash wherever he leaves his mark, and his ‘Spraycation’ to the Norfolk-Suffolk coastline has been no different.

His trail of street art murals, which appeared on the morning of Friday August 6, in Great Yarmouth, Gorleston, Oulton Broad and Lowestoft, not only created a buzz of excitement with local residents, holidaymakers and the art world in general, but is also set to leave a lasting legacy for the communities he visited with a street walk, exhibitions and workshops for young people being planned.

The reaction to the Banksy murals from the public and press, both local and national, was overwhelmingly positive and both Great Yarmouth Borough and East Suffolk Councils welcomed huge numbers of visitors to their resorts to view them, helping to put the area on the map as the councils made their joint bid to be UK City of Culture 2025.

In Great Yarmouth and Gorleston, where four murals were confirmed as genuine by the artist, Great Yarmouth Borough Council is commissioning two pieces of street art to be produced by professional street artists in locations which will help to build a route around the town linking the Banksy works and others to begin to establish art trails.

The commissioned street artists will also work with and engage with local young people, allowing them to develop and increase skills and to learn about the discipline and techniques involved in street art, including making stencils, shading and the wheat paste and poster process.

The Yare Gallery, at South Quay in the town, is also staging an exhibition by inviting members of the public to contribute their prints of the photos they have taken of the Banksy images. The gallery plans to cover a wall with them as an homage to the artist.

In Lowestoft, a project where communities can work alongside street artists in producing more street art in the town is being planned.

The street art works which appeared in East Suffolk - three in Lowestoft and one at Oulton Broad - were also confirmed as genuine by Banksy and here East Suffolk Council is working with Lowestoft art gallery 303 Projects on a talk for Heritage Open Days.

Taking place at the gallery on London Road South on September 11 and 12, the talks will look at the Banksy works of art and how they complement the existing art scene in the area. The event is being organised by Lowestoft Heritage Action Zones, with funding through Heritage Open Days pilot project New Wave which encourages 18-34-year-olds to engage in Heritage Open Day events.

With the artist’s work selling on occasion for seven figure sums, both councils have taken action to preserve and safeguard the murals, protecting them with security measures which include specialist coverings and monitoring.

In Gorleston, Great Yarmouth Borough Council is working with painting conservators and industry experts to remove one of the pieces, which depicted a flyaway inflatable with two children in it. Due to its proximity to the area of a tragic fatality of a child in 2018, this was painted over by a council operative but is to be relocated to another site for full restoration and public display.

In Lowestoft, one of the pieces was unfortunately defaced shortly after being confirmed as genuine and East Suffolk Council is working with specialists to restore the artwork.

Leader of Great Yarmouth Borough Council, Cllr Carl Smith said: “The appearance of the Banksy artworks on our streets has been an extremely exciting occurrence, creating a whirlwind of interest and drawing visitors from far and wide. We are determined to ensure that they are preserved so that they can continue to be enjoyed by as many people as possible, and that they will act as a catalyst to encourage others, and particularly our young people, to get involved in some form of artistic or cultural activity themselves. It has delighted us that this has happened as we join the race to become the UK City of Culture 2025 jointly with East Suffolk Council, and we’d like to think that maybe Banksy himself is signalling an approval of our bid.”

Cllr Steve Gallant, Leader of East Suffolk Council, said: “These artworks have created a real buzz around the local area, showcasing our wonderful part of the world. They continue to attract visitors from across the country and more importantly, they are being enjoyed by our communities. The key focus for our joint bid to become UK City of Culture 2025 is to offer and promote cultural activities which our communities can get involved with and whilst no decisions have yet been made, we would hope that these Banksy pieces will remain in place, if possible, for the benefit of our residents.”

Banksy, whose true identity remains a mystery, is considered to be one of the world’s top political artists and an exhibition of the largest privately-owned collection of his works, called The Art of Banksy, is currently running at Covent Garden in London. It features his iconic works such as Girl and Balloon, Flower Thrower and Rude Copper, as well as prints, canvasses and screen prints. The exhibition has already been seen by over three quarters of a million people across Australia, Israel, New Zealand, Canada and Sweden.

The Banksy Spraycation works of art in Great Yarmouth Borough Council and East Suffolk Council areas, where to see them and how they are being protected: 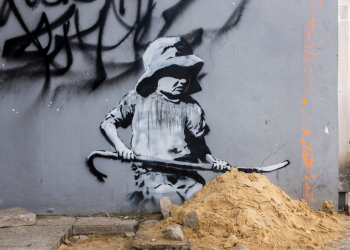