Former post office to be transformed into creative hub

Ambitious plans to transform an empty building into an exciting new visual arts and cultural space have been announced, as part of a wider programme of regeneration in Lowestoft’s town centre.

The former Post Office building in London Road North is located within the London Road, Lowestoft High Street Heritage Action Zone and is a flagship project within the Town Investment Plan.

Having lain empty, the Post Office was purchased by the former Waveney District Council in 2018 for redevelopment and to boost regeneration in the town centre. In March 2021, approval was given for a mixed-use commercial and residential development.

However, an exciting opportunity has arisen, and a new scheme has now been approved by East Suffolk Council’s cabinet, to redevelop the Post Office into a visual arts space maintaining the heritage of these historically important buildings in the heart of Lowestoft.

The arts space will be run by Messums, who are recognised for revitalising old buildings and embedding them within communities through artistic enterprise, and sculptor Laurence Edwards who began his art education in Lowestoft and subsequently developed an international reputation for large scale public works from his base in East Suffolk.

The hub, known as Messums East, will provide a working studio for Laurence Edwards, in addition to spaces for a revolving residency of international, national and regional artists, as well as exhibition spaces and screening room, and a café/restaurant. Laurence will also be working to create a large-scale bronze landmark sculpture for Lowestoft, casting it at his foundry in East Suffolk. He will work extensively with the local community from the new studio at the Post Office to see this realised.

Funded by Historic England and the Towns Fund, works have now been completed on the façade of the Grade II listed building, including repairs to the stonework, roof, sash windows and reconfiguring the front entrance to its original position. Planning and listed building consent for the conversion of the building to a gallery will be submitted in the coming weeks. Work on the sculptural project is expected to begin when the building and studios become open to the public.

“This is an incredibly exciting opportunity for Lowestoft and has the potential to bring real benefits to the local economy and the community as well as the region more widely.

“As detailed within the Lowestoft Town Centre Masterplan and Town Investment Plan, culture and leisure are seen as key to regeneration of the town and similar creative projects elsewhere in the country have had a hugely positive effect on the local area, attracting large numbers of visitors and increasing footfall.

“Creating this cultural hub in the heart of the town centre with an internationally significant artist will bring in visitors who would not normally choose Lowestoft as a destination and will also attract further investment from other cultural and leisure providers, as well as providing essential community and educational opportunities.”

The project has been made possible through the support from the Department for Levelling Up, Housing and Communities Towns Fund with £2,830,000 and £452,305 from Historic England to protect the significance of the Post Office building and enable its repair and restoration.

Tony Calladine, Regional Director for Historic England in the East of England said:

“We’re delighted to support the restoration of the Post Office and to see work start to bring this historic Grade II listed building back to life as a creative visual arts space. It’s an exciting new phase to the London Road Lowestoft High Street Heritage Action Zone and an important part of Lowestoft’s regeneration.”

"The Post Office is a wonderful building and I am delighted that we are able to develop a venue for creativity in Lowestoft, using this facility and the art that can be produced there to inspire the imagination.” 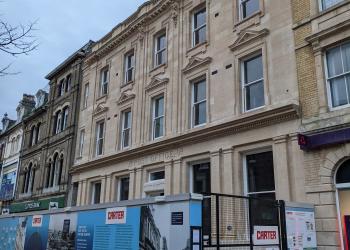